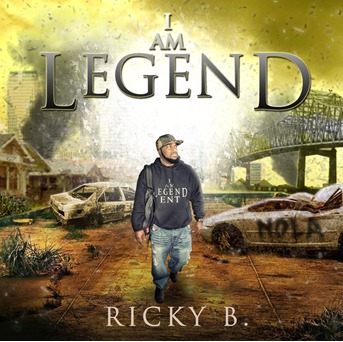 Born and raised in New Orleans St Bernard Housing Projects RickyB has seen, and lived the lifestyle of the Hip Hop genre (Gangster Rap) that would later influence his desire to become an emcee. Rapping since Where They At first hit the scene in New Orleans he decided to move his music away from the dark violent imagery of gangsta rap that he started with. Inspired by the works of many artists in the city and a newly created sound (Bounce Music) he recorded an EP titled B for Bounce under the Westbank based Mobo Records imprint which became an instant classic that included Shake For Ya Hood, Ya'll Holla, and Who's Got The Fire. With numerous performances across the country with some of hip hops favorites under his belt, a multicultural fan base, and proclamation of being a LEGEND from those familiar with New Orleans music roots, it seems fitting for someone who brings a positive message in every song recorded, and still keeps the crowd rocking. Quoted as saying in a magazine article "I try and reach out to listeners and let them know that you can listen to violent songs or whatever music you choose just don't get caught up in the lifestyle" shows that his lyrical